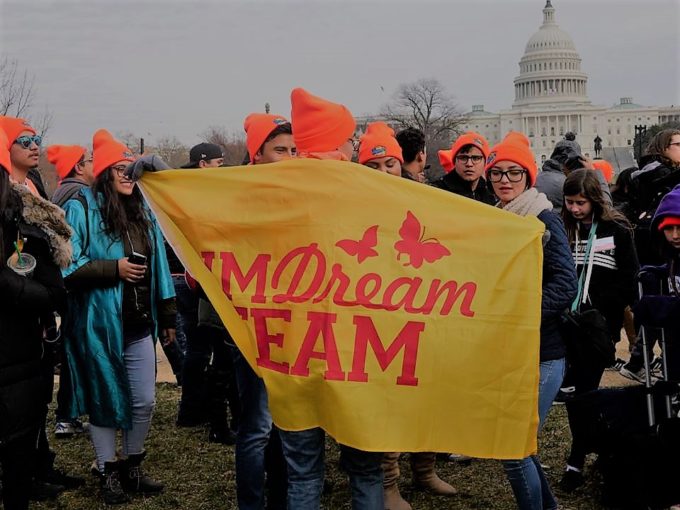 WASHINGTON, D.C. – Recently, Nancy Pelosi vowed to pass legislation that would give Dreamers a pathway to citizenship when Democrats retake control of Congress’ lower chamber this January.

“America draws strength from our long, proud heritage as a nation of immigrants. In the Majority, Democrats will work to reverse the Republicans’ destructive anti-immigrant agenda,” Pelosi said in a statement Saturday. “Our House Democratic Majority will once again pass the Dream Act to end the uncertainty and fear inflicted on patriotic young men and women across the country.”

Pelosi also stated that the Democrats will “protect TPS recipients and those fleeing unimaginable violence” while holding Trump and his administration accountable for his “zero tolerance” policy that resulted in the separation of thousands of Central American families at the border.

According to CBS NEWS, the statements are a response to a letter sent last Thursday by the Congressional Hispanic Caucus urging Pelosi for legislation that will provide a pathway to citizenship the more than 300,00 TPS holders and the more than 3.2 million undocumented young immigrants living in the country.

The letter also asks that Congress begin work on a “comprehensive immigration reform package” within the first one hundred days.

“These hardworking, taxpaying undocumented workers have enriched our country, while contributing their knowledge, traditions, and intellect to the fabric of our culture,” the letter reads. “They are part of America’s economic engine.”

This all sounds peachy, but promises have been made before.

Almost a year ago, more than 250 New Mexico Dream Team members, leaders, and allies traveled across the nation to Washington, D.C. to join thousands of undocumented youth in demanding for Congress to pass a clean Dream Act that would provide undocumented youth a pathway to citizenship without throwing their parents and families under the bus.

Promises were made then too.

We must not only hold Republicans accountable but Pelosi and the Democrats as well.

We must ensure that Pelosi’s promises aren’t just for political gain to ensure her seat as Speaker of the House.

As this new “blue wave” of politicians take their seats, we must hold them accountable to the promises they made that resulted in their victories.

Almost a year later, undocumented youth continue to live in the limbo that keeps them from feeling secure from deportation and being separated from their families. These youth are still awaiting a permanent solution that will allow them the opportunity to live without fear of deportation and with the ability to thrive.

These youth are still awaiting a permanent solution that won’t result in their parents being deported, or the building of a wall, or an increase in border militarization.

These youth are still awaiting  a permanent legislative solution that will give them a pathway to citizenship to the country they call HOME.