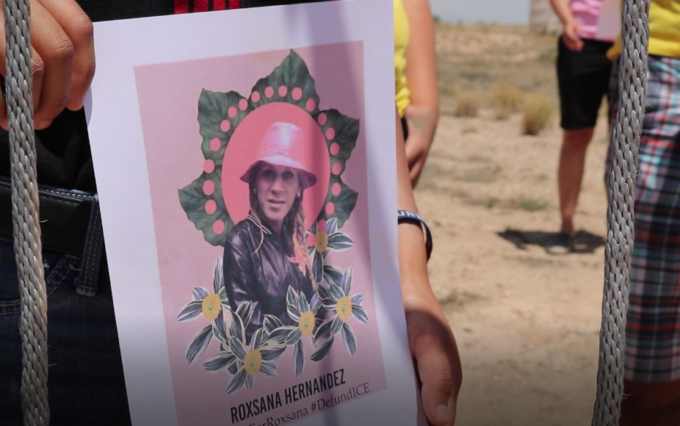 A  new independent autopsy done on the body of Roxana Hernandez, the tans Honduran asylum seeker who died under ICE custody earlier this year, shows she had injuries to her body as well.

The autopsy cites the cause of death to be untreated dehydration, symptoms related to her positive HIV status.

The new autopsy shows there was evidence of physical abuse, with “deep bruising” on her hands and abdomen, evidence of blunt-force trauma “indicative of blows, and/or kicks, and possible strikes with blunt object,” the publication The Daily Beast reported.

Roxsana’s story of physical and mental abuse, on both sides of the border, is one echoed in the lives of thousands of trans and queer Central Americans. A vast majority are forced to flee their native countries due to threats of fatal violence against them and the  endless discriminatory abuse they face just for being queer.

In Roxsana’s case, her reason for leaving Honduras was due to her being gang-raped by four members of the MS-13 gang which resulted in her being infected with HIV, according to and interview she did with Buzzfeed News.

“Trans people in my neighborhood are killed and chopped into pieces, then dumped inside potato bags,” Roxsana told Buzzfeed. “I didn’t want to come to Mexico-I wanted to stay in Honduras but I couldn’t…They kill trans people in Honduras. I’m scared of that.”

The even more harsh reality is that the violence and discrimination against them doesn’t end once they leave their homeland. Many face the same dangers on their travels and as Roxsana’s story tells, sometimes it continues on this side of the border.

“We know that transgender people as well as lesbians, gays, bisexual people who are in ICE custody experience higher levels of physical and sexual violence,” Lynly Egyes, director of The Transgender Law Center told KOB.

Donald Trump’s transphobic rhetoric and discrimination agenda against trans people isn’t helping the cause either.

Most recently, Trump and his administration asked the Supreme Court to issue a quick ruling on the Pentagon’s policy of restricting military service by transgender people. Earlier this year, the New York Times reported on a Health Department memo that stated plans by the Trump administration’s to deny the existence of trans people.

As we learn these new developments on the tragic story of Roxsana Hernandez, we must hold all those who are held responsible for her death accountable, as well as all those who are intent in hurting those whose sexualities are different from theirs.