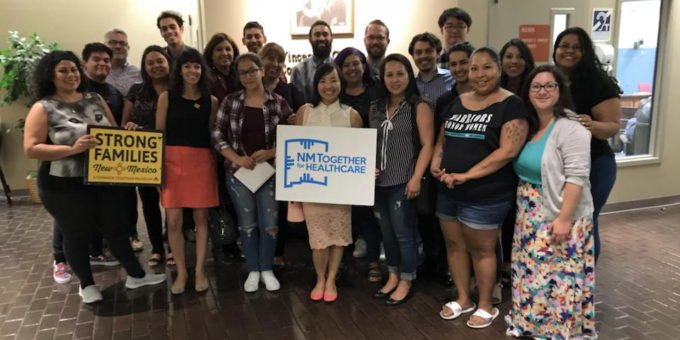 ALBUQUERQUE, N.M. – Monday, the Bernalillo County Board of Commissioners passed a resolution in favor of a proposal that will give New Mexicans the option to acquire their health insurance through a Medicaid buy-in.

The initiative is the result of the hard work done by the NM Together for Healthcare, a partnership between community members and policymakers who were looking to be able to provide affordable healthcare for ALL New Mexicans.

A Medicaid buy-in option is a great way to eliminate all the socioeconomic barriers that keep many New Mexicans without healthcare insurance. This initiative  is extremely important, considering our undocumented community does not have healthcare benefits because they are ineligible.

“My grandfather, an immigrant, could not get Medicaid when he had cancer and died because he could not afford treatment,” stated Lan Sena, a resident of Bernalillo County and a Strong Families New Mexico healthcare advocate in a press release by the NM Together for Healthcare coalition. Sena says she currently has cancer and although she has insurance, she still is unable to afford her treatments.

A story echoed throughout the Land of Enchantment.

Currently more than 850,000 New Mexicans benefit from Medicaid, including over 228,065 in Bernalillo County according to the release. This medicaid buy-in program would allow for the remaining 54,000 Bernalillo County residents who are uninsured to be able to obtain coverage.

In a time where the state is requesting the federal government impose new premiums on some of the state’s current Medicaid recipients, the Medicaid buy-in program is the solution for the thousands of New Mexicans across the state currently unable to afford coverage.

Currently, several New Mexican cities like Anthony and Sunland Park, as well as, counties like Dona Ana, and McKinley have passed several resolutions.

“A buy-in program would build upon Medicaid’s strong foundation to ensure families do not have to choose between death and financial ruin,” Sena stated.