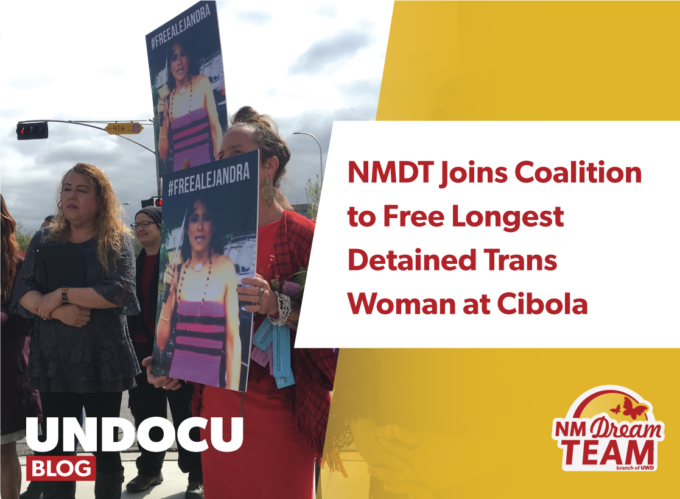 Barrera requested asylum at the U.S.-Mexico border in November 2017 and has been held in the Cibola County Detention since.

She was forced to flee El Salvador due to discrimination and violence against her after spending many years fighting for the respect and dignity of the transgender community.

She requested to be released on parole while awaiting the decision on her asylum case and was denied asylum in June of 2018. On April 2019, Alejandra was denied parole for a fifth time.

According to the TransLatina Coalition who are leading the efforts for the #FreeAlejandra campaign, Alejandra is being denied access to the proper medical treatments she needs.

Alejandra’s case is one echoed in the lives of thousands of trans migrants that have made their way to our southern border in recent months in search of a better life where they are free to be themselves.

The immigration system in the U.S is one that mistreats people who have suffered enough and are only looking for a safe place to call home.

Alejandra’s life is at risk.

She’s being detained at the same detention facility the late Roxana Hernandez was held. Hernandez was a transgender woman who traveled to the United States in a migrant caravan through Mexico and died in the custody of ICE and CBP in 2018.

As long as Alejandra is held in this facility her life will continue to be at risk. She is not safe at the hands of ICE.

For this reason, the New Mexico Dream Team decided to join the #FreeAlejandra campaign.

We signed a sign-on letter to be sent to ICE demanding the liberation of Alejandra.

With this letter we hope to get justice for Alejandra and all transgender people whose pleas aren’t being heard. We want to express our concerns for our brothers and sisters that aren’t being given parole in the system.

“As organizations which believe in supporting the safety and lives of those seeking asylum and fleeing persecution, we condemn the prolonged detention of transgender immigrants and encourage linkage to support post-release,” the letter reads, “ICE continues to criminalize immigrants for seeking safety, without taking into consideration the specific needs of these communities, especially Transgender Latina immigrants.”

Alejandra needs to be set free.

We need everyone’s help to free Alejandra. Make sure to sign and share the petition to demand that ICE gives Alejandra parole and improve the treatment of people waiting for parole in detention centers.