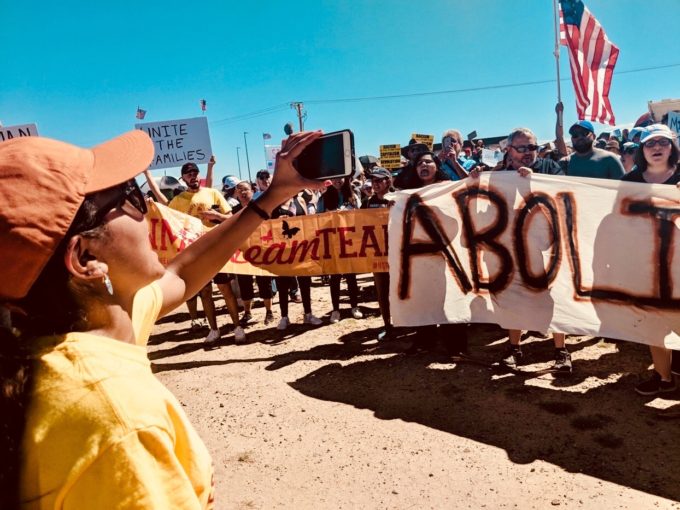 Tornillo, T.X. – Under what felt like over 100 degree heat, Ingrid Ordoñez, a seventh grade special education teacher from Albuquerque stood outside the Tornillo Point of Entry Detention Center shouting alongside thousands of others demanding the liberation of the hundreds of children being detained at the campsite, during Father’s Day.

“Say it loud, say it clear! Immigrants are welcome here!”, screamed Ordoñez at the top of her lungs as she chanted while hundreds echoed her words.

Since the announcement of the Trump administration’s “zero-tolerance” policy, nearly 2,000 children have been separated from their families according to the Department of Homeland Security latest numbers.

That’s the number the Department of Homeland security released, but in the lack of transparency that surrounds the  separation of children from their parents, those numbers could easily be skewed.

On Thursday, the Trump administration announced the new tent city that would be created to hold detained immigrant children in Tornillo, T.X. just about a 40 minute drive east from the city of El Paso.

As part of a rapid response effort, the NM Dream Team recruited members from the Albuquerque and Las Cruces offices to join a march where nearly 1,000 people showed they outrage against the new “zero tolerance” policy.

Ordonez said her main reason for marching was the cruel and secretive way in which the Trump administration is handling the children arriving at the border seeking asylum from their countries.

“Imagine these children who are being detained – we don’t know how long it’s been since they have seen their parents. The separation of families…they are not humane, they’re repeating history,” Ordonez said. “It’s just not right.”

Also amongst the over 1,000 participants, Sharon Farrell could be seen holding a signs that read, “Compassion, Not Cages!” Farrell said she’s been working with children as a psychotherapist and social worker in El Paso for almost forty years.

“Those kids are going to get affected if we don’t get them back with their parents quickly”, she said.

At the moment, tents can only be seen from the Mexican side of the border and from aerial views that have begun to go viral on social media. One can only imagine in what kind of living situation these underage political refugees are being put through.

Leaders from the NM Dream Team said they plan to continue working in partnership with our Soñando Juntos –United We Dream’s affiliate in El Paso, TX– to organize and demand the release of these innocent children and demand Congress to abolish ICE & CBP.