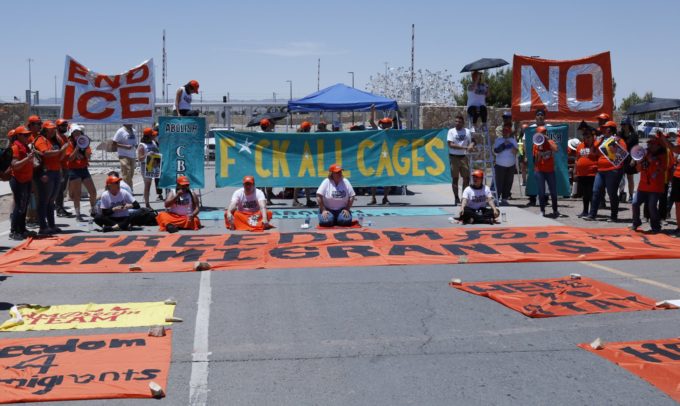 Tornillo, TX – Close to 100 immigrant leaders and allies of the New Mexico Dream Team made their way down to Tornillo, Texas to peacefully demonstrate and demand the liberation of all the children and parents currently being held at the Marcelino Serna Point of Entry – Detention Center, Wednesday morning.

Youth, parents, children, religious leaders, and even educators filled up the two coach buses headed towards the border. All eager and ready to go before the crack of daylight.

Noelia Jiménez, one of the mothers who joined the NMDT in the action brought her young daughter along so that she could experience firsthand the people’s outrage with what is happening at that detention center.

Jimenez said for her, it’s the best way to show her daughter that good people who genuinely care for others still exist in Trump’s America.

Jose, a 14-year-old boy from Albuquerque who joined NMDT on their trip to the border says the worse thing anybody watching the developments of the crisis at the border is inaction.

“They need to know that we can’t just be rolled around, we need to do something about it,” Jose said.

In Tornillo, NMDT joined United We Dream affiliates from all over the country in marching up to the from gates of the Detention Center.

It was truly a sight to see.

A sea of bright orange shirts and caps that read “Abolish ICE & CBP” could be seen all around the front gates.

In what seemed like perfect timing, two buses carrying more immigrant children into the detention center passed right next to the demonstration and drove into the center.

Many of the activist took the opportunity to say a prayer and signal the children passing by to let them know that they were there for them, screaming at the top of their lungs for their liberation under the hellish El Paso heat.

“Today,  we let those children know what we are here for them. We let them know that they are not alone, and that we will not stop until justice is served and they are back with their loved ones,” said LuzHilda Campos, national deportation defense lead for United We Dream.

Border Patrol agents could be seen on the other side of the fences at the Tornillo port of entry looking onto the demonstrators screaming chant after chant.

In a overnight ruling made on Tuesday, U.S. District Judge Dana Sabraw from San Diego ordered that the thousands of migrant parents who were forcibly separated from their children at the Mexican border be reunited with them within 30 days, 14 days for youngsters under the age of 5.

The ruling was one that was much needed considering the Trump administration has shown no urgency or importance to the reunification of these families.

Since the signing of Trump’s executive order last week, only around 500 of the over 2,300 affected children had been located or reunited with their families. Parents liberated under this order found themselves desperately trying to find their kids.

The Trump administration’s response to their desperation, a 1-800 number.

The reality of the administration’s urgency was evident in the two buses carrying children that passed by the action. The action ended peacefully, without any arrests, damages, or heat-induced injuries.

Demonstrators left banners tied and hanging from the detention center’s entrance and exit gates. Messages like “Free Our Future” and “Freedom For Immigrants” could be seen on the dozens of banners posted.

The big victory came and went in just a matter of seconds.

The true victory came the moment the detained children passing by locked eyes on the mass of people that were there for them.

The true victory came the moment they realized somebody cares.