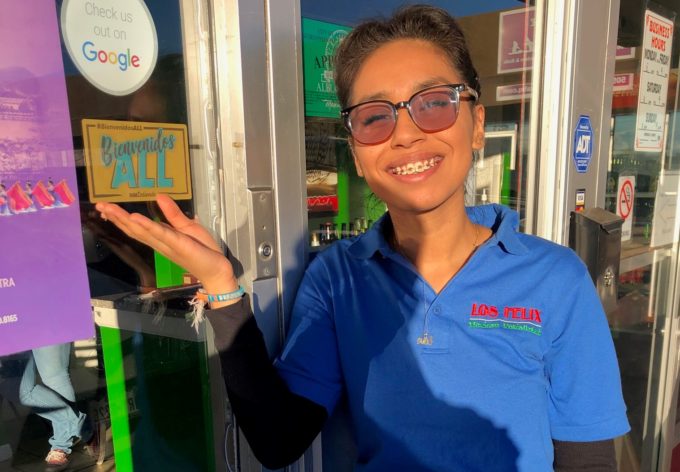 ALBUQUERQUE, N.M.– Today, the New Mexico Dream Team is all about getting the word out on the new NM Entiende coalition which is working towards ending religious refusals in New Mexico.

The coalition’s goal is to put an end to service providers using religious refusals as a license to discriminate and refuse services to people whose intersectionality don’t agree with their beliefs, more commonly used against the queer community and women’s reproductive rights.

As an immigrant youth rights organization, the New Mexico Dream Team seeks to ensure that queer immigrant youth are also being protected from this terrible form of homophobic discrimination.

These refusals aren’t anything new, however, the hateful anti-LGBTQ and anti-choice rhetoric being pushed out by our current administration are embolding more service providers to use this kind of discrimination.

An example that made national headlines most recently came from Colorado where a baker refused to bake a cake for a same sex couple, citing religious liberty as the reason for the refusal. To make matters worse, the Supreme Court ruled in favor of the baker saying the Colorado Civil Rights Commission investigation initiated with an already hostile bias against the bakers religious beliefs.

New Mexico isn’t exempt from religious refusal headlines. This past February, an Albuquerque mother said her son’s martial arts teacher kicked him out of class after finding out he had two mothers.

It’s these kinds of discriminations that the  NM Entiende coalition is working towards putting an end to through it’s “Bienvenidos All” campaign. The campaign looks highlight businesses, healthcare and service providers that have an open door and warm welcome for all our families, across all identities.

The New Mexico Dream Team is excited to highlight businesses like Los Felix Mexican Restaurant who are proud supporters of the Bienvenidos All campaign who are open to all people, no matter of identity.

“I believe that it’s important for businesses to be opened to all because it reflects the demographics of what makes Albuquerque a flourishing town,” Lucio Franco Felix, owner of Los Felix Mexican Restaurant stated.

Like Los Felix Restaurant, we welcome any place of business that is built on the New Mexican values of understanding and inclusivity then join us in welcoming all, BIENVENIDOS ALL!