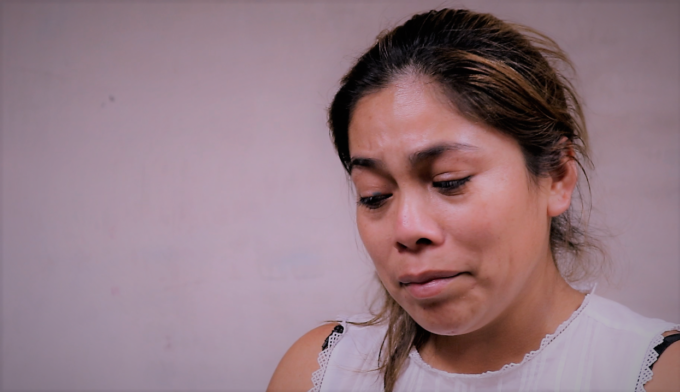 Albuquerque, N.M – Last Friday, members of the New Mexico Dream Team had the opportunity to meet in person with an immigrant mother who was separated from her children last May and – with the help of  allies – was on her way to reunite with her children in New York.

Yeni Gonzalez-Garcia was separated from her three children, Lester, 11-years-old, Jamelin, 9-years-old, and the youngest, Deyuin, who is only 6-years-old. They were taken away from her after being detained at the Texas border this past May. Gonzales-Garcia says she and her children left their native country of Guatemala fleeing from gang violence.

“You’re going to be deported back to your country, and your children will stay here in the hands of the government,” Gonzalez-Garcia said she was told at the Yuma Detention Center in Arizona when she arrived with her three kids. “It broke my heart, they started crying and telling me they didn’t want to leave my side.”

Gonzalez-Garcia says she spent two days with her children inside the “hielera” at the Yuma center before being seperated from them. The children were then sent to the Cayuga Center in East Harlem, New York while she was transferred to a detention center in Tucson, Arizona.

“For seventeen days I didn’t know anything about my children. Absolutely nothing. I asked for information about their whereabouts everyday, all day, and was never even given the time of day,” Gonzalez-Garcia stated.

Fortunately, Gonzalez-Garcia was able to contact relatives living in North Carolina who found the children in a foster- home shelter in New York. The relatives then contacted the organization’s lawyer and provided him with birth certificates of the children. Not soon after, the lawyer from the shelter where the children were staying posted Gonzales-Garcia’s bond.

Then began Gonzales-Garcia’s cross-country journey to reunite with her children.

For many parents in the same boat as Gonzalez-Garcia, it is difficult for them to travel around the nation since many are without proper identification. However, many people, allies, have taken the time to help many of these parents reunite with their children by driving parents, like Gonzalez-Garcia themselves.

One of these allies is longtime NMDT educator ally, Cristyn Elder, Associate Professor in the Department of English at the University of New Mexico. Elder and her husband, Tyler Johnson, an advisor for UNM’s School of Management, helped Gonzalez-Garcia’s journey by driving her from Albuquerque to Pueblo, Colorado.

“Even if we were only a small part of Yeni’s journey across the U.S….one can easily get discouraged by the daily horrors coming from the Trump administration, so it’s important to look for ways to bring about good, to bring about change. I don’t believe it’s enough to identify as an ally,” Elder said.

“It is simply the right thing to do. Since the government is actively committing human rights violations, and no other public institutions are stepping forward to correct the problem, the responsibility to help falls to people who recognize the error in these policies,” stated Johnson.

Elder was one of many New Mexican educators who joined the NMDT last week in the national action held down in Tornillo, Texas to demand the liberation of immigrant families being separated and detained under Trump’s zero-tolerance immigration crisis.

Elder said she wanted Gonzalez-Garcia to have the opportunity to meet with members of the NMDT to show her that there are people currently fighting and voicing their opinion against the inhumane treatment and incarceration of thousands of immigrants in recent months.

“I was especially grateful that Yeni got to meet members of the New Mexico Dream Team before we drove out of ABQ. I think it really helped her to know that there is a whole community of people who understand her situation, who have an idea of what she is going through, and who are there to support her on her journey back to her children,” stated Elder.

NMDT met with Gonzalez-Garcia before she left with Elder and her husband last week. In an emotional and powerful meeting, NMDT members made sure to let Gonzalez-Garcia know she is not alone and that she “will always have a home in New Mexico” and made a monetary donation to help her in her journey back to her kids.

“Don’t give up, keep praying and don’t lose hope, God will find a solution,” Gonzalez-Garcia said directing the message to all those mothers who were detained with her and all the parents currently searching for their kids.

Last week a federal judge from California gave the Trump administration 30 days to reunite all those families they separated under the zero-tolerance policy. However, at the moment more than 2,000 children still remain separated from their parents.