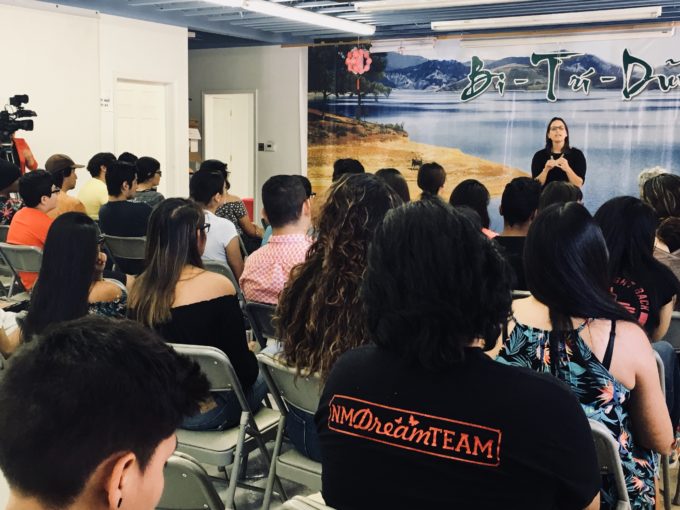 The program will also provide opportunities for participants to get hands-on experience by allowing them to assist and partake in actions, organizing community events, and registering people to vote.

Attending youth will waste no time in acquiring that hands-on experience, many will participate in the national action taking place this week at the Tornillo, TX – Point of Entry Detention Center. The national action being lead by NMDT’s national affiliate, United We Dream, is to demand Congress abolish ICE & CBP, and to call for an end of immigrant detention nationwide.

Trump and his administration has not been shy about their attempt to criminalize and discriminate against immigrant, refugee, LGBTQ, and youth of color communities.

Not to mention the more than 1,500 undocumented children still awaiting their reunion with their loved ones at children detention camps in Texas after being separated from their parents due to the implementation of the “zero tolerance” policy.

Comparing all youth of color to MS-13 gang members, and terminating DACA are just other bullet points on a long list of discriminatory attacks against our youth from Trump and his administration.

In the social media age, these youth are fully aware of these discriminatory attacks being made against them and their communities by the Trump administration and their followers.

It is important that these youth have the opportunity and space to take action and do something about it.

“Summer of Dreams intends to provide these youth with the tools and guidance to help them discover their power to make the changes they want to see in their communities through community organizing”, said Gabriela Hernandez, executive director of NMDT.

Albuquerque’s First Lady, Elizabeth Keller, was the guest speaker at the opening ceremony. She and her husband are both strong supporters of the Summer of Dreams Youth Program because they believe in the progression that NMDT wants to bring to Burque.

“My husband and I are committed to moving this city forward”, Keller said, “Continuing to work collaboratively with folks all across this town to create a safe, inclusive, innovative city that works for all of us.”

The program currently has around 150 participants enrolled, 60 right here in Albuquerque. Summer of Dreams classes will also be offered all across the state in Las Vegas, Santa Fe, and Las Cruces.

“We’re excited to see youth getting involved in the issues that affect their communities the most. I’m excited to see the fire in their eyes when we go down to Tornillo to demand the liberation of those poor detained families and the abolishment of those who have them captive”, Hernandez said.

The Summer of Dreams program will run until early August 7th. It’s not too late, all youth interested in this progressive summer program can still register to participate and join the next generation of New Mexican organizers.