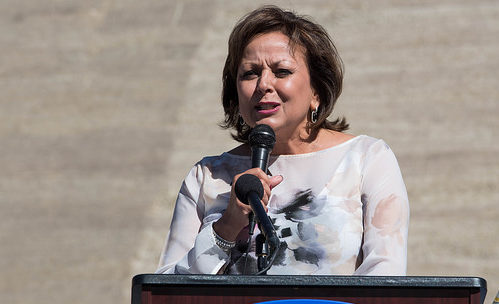 There is no doubt on where Susana Martinez, New Mexico’s Governor, stands in regards to immigration and border security. The former Dona Ana County prosecutor has always been a very vocal and strong supporter of tougher border enforcement.

According to Martinez, and her political platform, she has also always been a strong advocate for children in the state, always pushing for harsher penalties for those convicted of child abuse.

However it’s not hard to see how much her advocacy has actually worked. According to a study done by the New Mexico Voices for Children, at the start of 2018 New Mexico placed 49th in child well being.

Additionally, according to the annual Quality Counts report by the national Education Week magazine, at the beginning of the year New Mexico ranked next to last for public education. Now, we’re not saying that shes not advocating for children, but numbers don’t lies

It also seems as though the Governor picks and chooses the children she advocates and helps, and we can clearly tell you that undocumented children are at the bottom of her list.

This past Monday, while attending the opening of a manufacturing plant in Santa Teresa near the border she publicly stated her support for the Trump administration’s zero-tolerance immigration policy, that allows for the separation of children from their parents who crossed the U.S. border illegally.

“We don’t let people who break the law continue to be out breaking the law simply because they have children,” Governor Susana Martinez said Monday in response to a question from the Albuquerque Journal about the Trump administration’s zero-tolerance policy.

I guess she forgot about all those political refugees that immigrated to our American border looking for asylum. As a prosecutor with 25 years under her belt, shouldn’t she know that they are not breaking the law?

Most of these political refugees looking for asylum are simply desperate parents with their children trying to escape the violence and danger in their native countries and provide the best lifestyle possible for their children.

Martinez didn’t stop there, she attempted to explain her reasoning behind her support of the zero-tolerance policy telling the Albuquerque Journal, “As a prosecutor for 25 years, if your parent went out and robbed a store with a gun and stole money because they needed to buy drugs, we arrested that individual and that individual went to jail and arrangements were made for that child, the best arrangements.”

Let’s pause for a second. From the statement she made it is crystal clear that she compared the act of undocumented parents that immigrate to our country looking for a better life for their families to criminal American parents who rob banks. Sounds very in line with the Trump administration’s “they are all criminals” rhetoric.

However, when asked by the Journal if she indeed was making that comparison, Martinez responded, “No, of course I’m not, but I’m just telling you we do that to American citizens, American citizens who break the law that way.”

The Journal reported that, for the third month in a row, Border Patrol agents have arrested more than 50,000 people for crossing the border illegally since March. There is no question that innocent people and children are being arrested and treated like the actual criminals they already have detained.

Martinez told the journal that another reason for her backing the zero-tolerance policy is the possibility of being an accomplice to human trafficking by allowing illegal immigrants to come into the country with children.

Well, we really doubt that any villainous criminal actually involved in human trafficking would apply for asylum at the American border. A lot of these people being detained are asking for asylum to avoid being pulled in or hurt by the crimes ridding their native country, like human trafficking.

According to the Journal, Martinez suggested that the undocumented parents being separated from their accompanying children for illegally entering the country can avoid having their children taken away from them simply by not crossing the border illegally.

Well, Susie, that is easier said than done. It’s hard to fathom from the Governor’s mansion the harsh conditions that would drive a parent  to make the decision to leave their home, risk their and their children’s lives by immigrating to the United States.