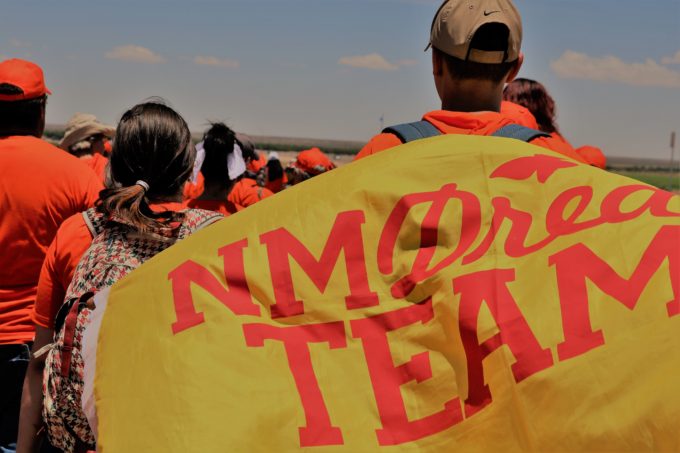 Albuquerque, N.M. – Today, thousands of New Mexican “DREAMers” – and all across the nation – await a decision from a Texas federal judge that can change the course of their lives.

Today, a federal judge in Texas is hearing arguments on whether to issue an injunction ending DACA – Deferred Action for Childhood Arrivals – in a case filed by that state’s attorney general.

Banuelos is a DACA recipient and a member of the New Mexico Dream Team. She recently graduated from an Albuquerque public school and is planning on attending Central New Mexico Community College in the spring.

Banuelos migrated from Chihuahua, Mexico to the states 17 years ago when she was 2 years-old. Her DACA expires in 2020.

“You really don’t know whether to be afraid or just hope that those in power realize how many people lives are affected by this decision,” Banuelos said.

The battle to decide the fate of DACA – and that of the more than 700,000 DACAmented people – has become somewhat of a legal war.

While many await the Texan judge’s decision, four federal judges from San Francisco, New York, Maryland and our nation’s capital  have issued rulings that would protect the program, Trump and his racist, xenophobic administration announced last year they were rescinding.

Victor Nevarez, a leader with the New Mexico Dream Team, migrated to the states from Sonora, Mexico when he was seven years-old.

Apart from allowing him to work and attend school, Nevarez says DACA gives him something many undocumented people don’t have, peace of mind.

“If my DACA is taken away I would no longer feel safe from deportation, especially since they have all of our information, not to mention I would have no way to work to support myself,” Nevares said.

Nevares and Banuelos are only two of the estimated 6,800 DACAmented people living in New Mexico.

“No matter the outcome, I know that we are a strong community and we can get through it together,” Banuelos stated.

In the last ten months, through DACA clinics,  the New Mexico Dream Team – alongside United We Dream – have given more than 230 DACA renewal scholarships to ensure all those who are looking to renew their DACA can do so.

We can’t forget that the attacks on DACA beneficiaries and all immigrants are attacks on whole families, whole communities and on who we are as a nation.

“Today’s decision will affect not only my future but my children’s future as well,” Dulce Medina said.

Medina is a mother of two natural-born citizens. She migrated to the states when she was 15 years-old and has lived in Albuquerque for almost 21 years.

Medina graduated from Rio Grande High School in Albuquerque and continued her higher education at the University of New Mexico where since she has since attained two bachelor degrees, a master’s degree in social work and is currently working on another master’s.

“My job, school, and the livelihood of my family is at risk with this decision,” Medina stated.

Flaviano Graciano is the Communications Manager for the NM Dream Team.