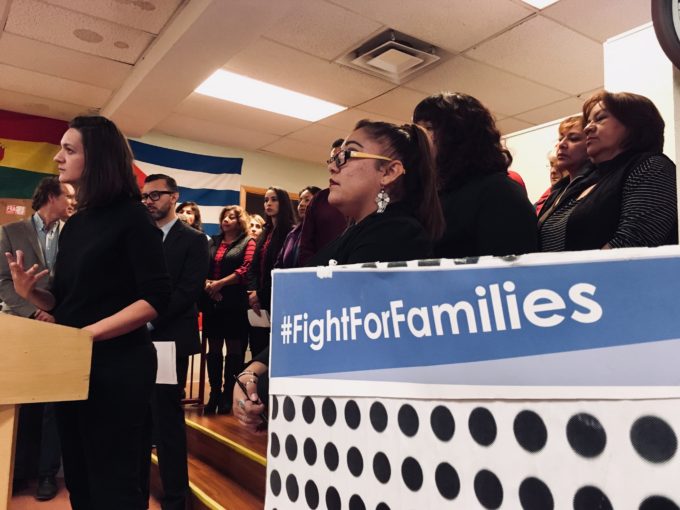 ALBUQUERQUE – Today, immigrant rights leaders and economic justice advocates held a press conference to talk about ways to oppose Trump’s “Public Charge” rule and the negative effects it will have on everyday New Mexicans, documented or not.

Trump’s racist and xenophobic “public charge” rule would severely limit access to public services and assistance to immigrant families. The rule will allow the federal government to deny green cards and visa renewals to immigrant families currently living in the country legally who participate in federal programs that provide assistance with healthcare, food, and housing.

This “public charge” rule is nothing but another attack on our immigrant communities, part of the current administration’s racist agenda to deport and deny residency and citizenship to as many immigrants as possible.

Attacking access to everyday necessities is a low blow.

“No one should have to choose between being with their family and eating,” Sovereign Hager, ledal director at the New Mexico Center for Law and Poverty said, “But that is exactly what the Trump administration is proposing with this regulation”.

The new rule extends the list of programs that put at risk immigration status to vital programs like Medicaid, SNAP, and Section 8 housing assistance. At the moment only cash benefits and institutional care apply as reasons to deny documented immigrants visa renewals or legal residency application.

“It shifts our immigration system to one that is based off wealth,” Hager stated.

According to Eduardo Garcia, an equal justice attorney fellow at the New Mexico Immigrant Law Center, the changes do not apply to asylum seekers, refugees, children under special immigrant juvenile status, beneficiaries of visas for crime victims, victims of domestic violence or victims of trafficking. Garcia also says that the use of public benefits by immigrant children won’t affect their parents, but will be a factor in their own public charge determination.

“This policy change, and the rhetoric behind it, replicate unsubstantiated and disproven stereotypes about immigrants,” Garcia stated, “Categorically, immigrants use less public benefits but contribute more in taxes which fund those public benefits.”

At the moment Hager and Garcia say the best move to fight back is to submit comment to the federal government. Since the announcement of the changes to the public charge on October 10th, over 20,000 comments have already been submitted according to Hager.

The deadline to submit a comment to the federal government on this issues is October 10th.  The link to submit your comment is here.