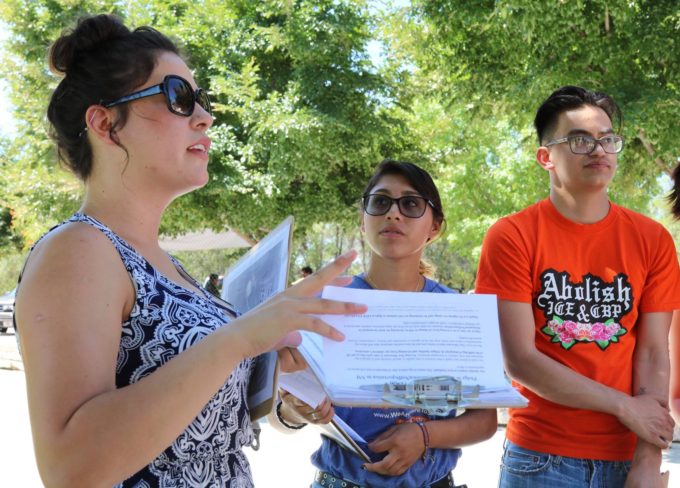 Albuquerque, N.M. – The New Mexico Dream Team launched its first civic engagement campaign focusing on educating the New Mexican community on the state’s need for more investment in education, and not deportation.

“Down-down with deportation, up-up for education!,” could be heard all across the Dolores Huerta Gateway Park as NMDT members gathered for the opening ceremony early Saturday morning.

Francisco Lopez-Peralta, a student applying for medical school at the University of New Mexico, and a DACA beneficiary, opened the launch event speaking to attendees about the importance that education has played in his goal of achieving his American dream.

Lopez-Peralta also spoke about the dire need for educational investing in our state.

Lopez-Peralta says lack of funding is really making it tough for New Mexican students to reach their full potential academically, which in turn is having a negative effect on the state’s economy.

“I am blessed, for being a self starter,” Lopez-Peralta said, “But no everyone is being built to be the next leaders of New Mexico. This state has a notorious educational system and yet it spends much more funding on private institutions like detention centers.”

Currently, New Mexico is ranked last in education nationwide, but leading in for-profit detention, especially from the detention of undocumented immigrants.

The Live Unafraid campaign hopes to reverse these standing through a canvassing, door-to-door educational campaign.

“My goal is to stimulate the economy and be a progressive member of society as licensed professional,” Lopez-Peralta stated.

After the opening ceremony, attendees canvassed the neighborhoods of Albuquerque’s South Valley searching for community members to sign a pledge affirming their commitment to fighting for more state investments in education, and not the inhumane practice of stimulating the state’s economy off of the incarceration of black and brown people.

Janeth Antillon, manager of the Live Unafraid – Santa Fe Campaign said it is important to her that her siblings, “be able to get the best education possible so that they can contribute back to their home state in a healthy and safe way.”

Antillon participated in Saturday’s canvassing event in preparation for her Santa Fe launch this upcoming Saturday.

“To me, living unafraid means having equal rights, it means being able to call the police without fear of being deported, it means not being targeted because of my immigration status or the color of my skin,” Antillon said.

Antillon migrated with her parents to New Mexico from Chihuahua when she was young, her two younger siblings were born in New Mexico.

Antillon says her fight in this civic engagement campaign stems from the reality of the quality of the public education her sibling’s are receiving and the fear she and her parents have had to live with due to their immigration status.

The Live Unafraid – Santa Fe launch is scheduled for this upcoming Saturday, July 28. You can join the fight by signing the Live Unafraid pledge or visit NMDT’s website for more information of future canvassing dates.