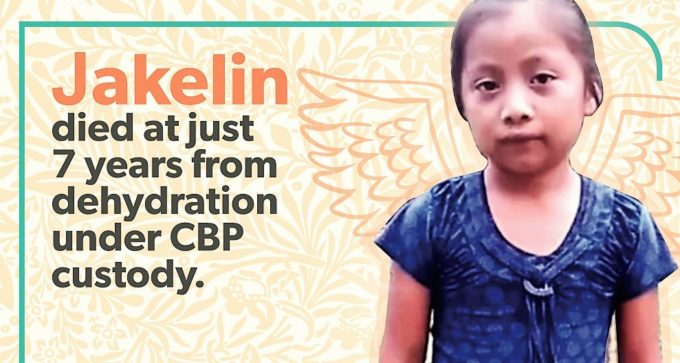 Her name was Jakelin. Her full name was Jakelin Amei Rosmery Caal Maquin. She was a 7-year-old girl from rural Guatemala and she died of dehydration in American custody. The little girl and her father were among a group of more than 100 migrants who turned themselves over to Border Patrol agents on the night of December  6th, after they had crossed the U.S.-Mexican border.

She was on a bus with her father when her father told the authorities that she was sick. She was on that bus for at least 90 minutes. By the time the bus reached its next stop at a border station, she was no longer breathing.

According to CBP records obtained by The Washington Post, the child began having seizures at 6:25 a.m. Emergency responders, who arrived soon after, measured her body temperature at 105.7 degrees, and according to a statement from CBP, she “reportedly had not eaten or consumed water for several days,” the article reports.

After being taken to a hospital in El Paso, the child went into cardiac arrest and “was revived,” according to the agency, the Post report. “However, the child did not recover and died at the hospital less than 24 hours after being transported,” CBP said.

To make matters worse, the Secretary of the Department of Homeland Security, Kirstjen Nielsen, blamed the little girl’s family for putting her through such a hard trip.

However, the Trump administration is doing everything in its power to make the journey even more hazardous.

U.S. Border Patrol agents routinely vandalise containers of water and other supplies left in the desert for migrants, condemning people to die of thirst in baking temperatures, according to two humanitarian groups.

According to the Post article, the ACLU blamed “lack of accountability, and a culture of cruelty within CBP” for the girl’s death. “The fact that it took a week for this to come to light shows the need for transparency for CBP. We call for a rigorous investigation into how this tragedy happened and serious reforms to prevent future deaths,” said Cynthia Pompa, advocacy manager for the ACLU Border Rights Center.

Children shouldn’t be dying of thirst and shock in American custody.

Any time a child’s life falls at mercy of these agencies, they have a responsibility to protect them.

This also applies to the American government.

The number of immigrant children being held in government custody has reached almost 15,000. And the number will only increase as time goes by.

The American government should be doing everything in its power to protect these kids, not putting their lives in danger by trying to stop them from coming into this country. The people living in this country should also demand a change.

Excuses are being made, fingers are being pointed, but no one is doing anything.

For Jakelin, and all the children being held in detention centers, we must fight back and demand justice.

Naomi Perez is a Communications Fellow with the New Mexico Dream Team.