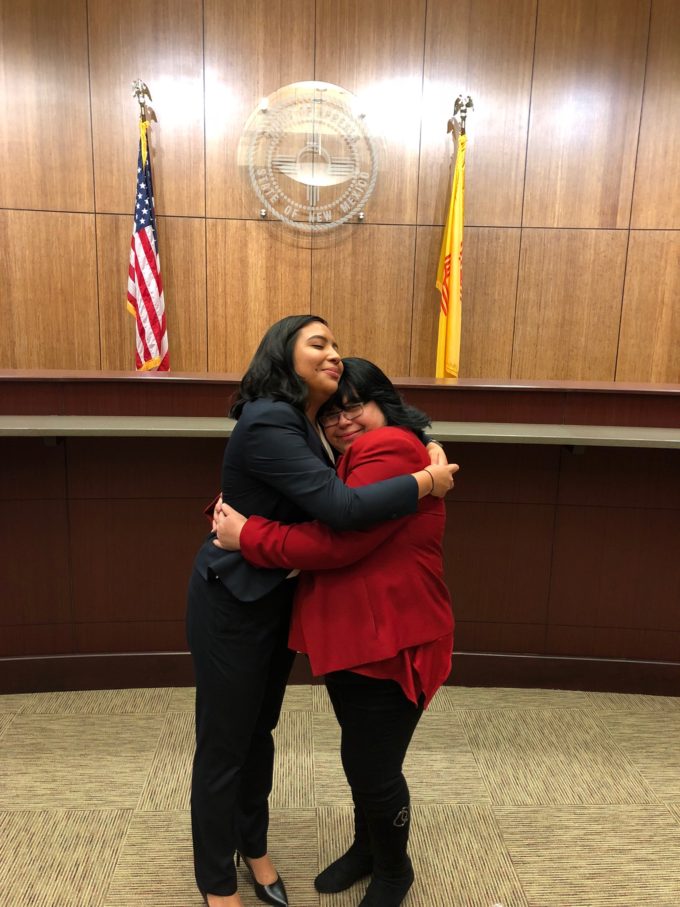 NEW MEXICO – The New Mexico Supreme Court is considering a rule change that would allow immigrants in our state, regardless of their immigration status, to practice law in New Mexico after passing the bar exam.

Currently, the New Mexico Supreme Court rules allow for US citizens and some immigrants with work permits, including those with DACA, who have passed the bar to practice law in the state. With the Trump administration’s termination of DACA playing out in federal courts, this rule change would allow undocumented attorneys to practice law should the DACA program be revoked in its entirety.

Jazmín Coronel, longtime NMDT member and current practicing lawyer, played an important rule in the development of the proposed rule change. Coronel, like many others, invest endless hours, money, and their entire lives, into their education in hopes of one day achieving their dreams of practicing law, only to be barred and unable to do so upon graduation.

“It’s crazy! As an undocumented student you not only have to meet the grueling demands of the program, but also worry about your safety and your family’s safety. At the end of the day, you get your degree, you study for the bar exam, pass the exam, and then still have to wonder whether or not you will be admitted to practice law.”

Coronel immigrated from Sinaloa, Mexico to Arizona with her mom and twin sister when she was three years old. There she faced first hand the racism and hate many people in this country have for the immigrant communities. She and her sister were not aware of their undocumented status until they were 16 years old, a story echoed in the lives of many undocumented youth living in this country.

“When my mom told us, everything made sense. She had always been so afraid of police and was always terrified of letting us travel with our high school athletic teams for meets,” Coronel stated.

With that news, the barriers that come with being undocumented all of the sudden became all too real.

“In Arizona we couldn’t get a drivers license, we couldn’t go to college, I couldn’t walk out of my front door without being afraid that Joe Arpaio’s administration would stop me after racially profiling me,” Jazmín said.

Not long after that, Jazmín and her family left the racially restrictive Arizona for the “Land of Enchantment,” which to them became“the Land of Opportunity.” Here, Coronel finished high school and made her way through undergrad at the University of New Mexico.

Originally intending to go to medical school, a business law educator made an impact on Coronel that would change her career path and lead her to become the lawyer she is today.

“She told me, if you want to change the way the world works, you have to learn the way the current rules work and then change them,” Coronel stated.

Having been undocumented and without DACA for the first two years of law school, she faced the harsh realities many undocumented law students face when it comes time to apply for admission to the State Bar of New Mexico: the uncertainty of not knowing whether or not they will be allowed to practice law.

However, her drive to achieve her dream motivated her to keep fighting and move forward. Through collaboration with law professors and local attorneys, Coronel and fellow colleagues were able to draft the proposed rule in hopes to change a system that restricts many immigrant youth in the state from realizing their dreams of practicing law.

“For New Mexico to invest in their students, including those who are undocumented, come from different socioeconomic statuses, have different cultural backgrounds and can connect with underrepresented communities — that diversifies the perspectives that result in more fair and just law practice in the courtroom.”

Coronel says that enacting the change in the rule will also make a huge difference in terms of culturally competent representation and the ability of attorneys to understand the issues of the clients they are serving. As a border state with a large immigrant, refugee, and culturally diverse populations, it is important that these backgrounds are represented in our courts of law.

It is not clear when the court will be making their decision.