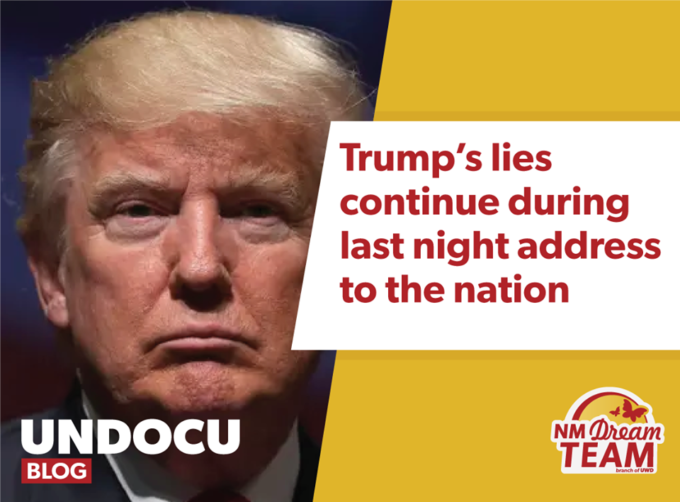 Last night, Donald Trump addressed the nation and presented his case on what he believes is a humanitarian and national security crisis at the border.

In his speech, Trump claimed that “America proudly welcomes millions of lawful immigrants who enrich our society and contribute to our nation, but all Americans are hurt by uncontrolled illegal migration. It strains public resources and drives down jobs and wages.” This is very misleading considering that immigrants do not take jobs from Americans.

The jobs we see immigrants work are hard jobs that would not usually be taken by someone who has the opportunity to get a better job. In many cases, immigrants are seeking jobs that American citizens do not want to do.

The President also said that “The wall will also be paid for, indirectly by the great new trade deal we have made with Mexico.”

This statement is false.

The recent government shutdown centered around Trump’s request for over $5 billion in border wall funding, money he expected to come from taxpayers. If Mexico were really going to pay for the wall, the government shutdown-which is leaving 800,000 Americans without pay-  would not be necessary.

“The government remains shut down for one reason and one reason only: the Democrats will not fund border security,” Trump also said. This also is a misleading statement, considering Democrats have shown their support towards border security by proposing bills that would fund DHS. Congressional Democratic leaders have offered funding of about $1.3 billion for border security in the current shutdown fight, which apparently is not enough.

Trump also claimed that “At the request of Democrats, it will be a steel barrier rather than a concrete wall.” But they did not propose a steel barrier as an alternative. On the contrary, Democrats have continued to oppose the construction of any new steel or concrete barrier on the Southern border.

In last night’s address, Donald Trump tried to use lies to instill fear in the minds of Americans. We can not allow this type of government to rule our country, and negatively impact our immigrant communities.

We must continue to fight back and ensure this border wall is not funded. Trump’s demands to fund a wall and deportation force would further criminalize vulnerable communities.

We urge you to call and ask your elected officials they stop giving money to ICE and CBP.